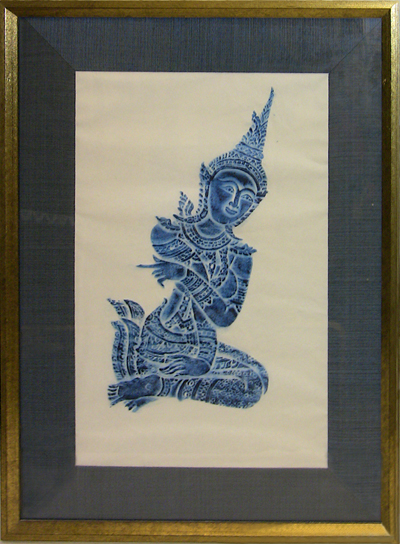 Cultures often define their uniqueness by creating epic poems or stories.  Ancient Greeks had the

Odyssey and the Iliad; Germans had the Nibelungenlied; and—let’s face it—America’s Baby Boomers have Star Wars.

While serving in Korat, Thailand I discovered that the key to understanding Thai culture was the country’s national epic: the Ramakein.  This myth has its roots in the Hindu epic poem known as the Ramayana, a story recounting the age-old struggle between Good and Evil.  Although the Thai people are 95% Theravada Buddhists, their religious traditions are strongly influenced by neighboring cultures in India, Laos, and Cambodia.

The Ramakein epic is so pervasive in Thai literature, theater, dance, and art that I began, as a Peace Corps volunteer, to read more about it.  I wanted to better understand my co-workers and friends.   Soon, my interest in Ramakein became a gateway that led me into heartfelt friendships and fascinating conversations.  Through these discussions, I began to make connections and analogies between western and eastern belief systems.  I was even able to see glimpses of Ramakein themes in the everyday lives of Thai people.

The story was originally expressed in stone carvings on temple walls throughout Thailand.  Before the printing press, it was common for Thais to capture mythic stories by making rubbings, transferring the three-dimensional images to rice paper or silk.  Characters from the Ramakein epic hang on walls in homes or places of business all over Thailand.  Today, Americans can view temple rubbings in Thai restaurants across the United States.

I purchased a silk reproduction of a Thai dancer while serving as a malaria eradication assistant in Korat.  This city in northeast Thailand is located near the Mekong River, which forms a border with Laos.  The people speak several dialects, including Khmer, which is the Cambodian national language.  Bangkok, in southern Thailand, is the country’s richest region; Isan (where Korat is located) is the poorest.  Although this region is Thailand’s largest, it provides only 10% of Thailand’s gross national product, and 3% of its tourism revenues.  Korat’s primary agricultural export is sticky rice.

I was attracted to this particular rubbing because of the gracefulness of the dancer.  Her form is so peaceful, her posture personifies beauty.  For a Thai girl to be chosen to be a dancer in a Ramakein play, it would be similar to a young American ballet student being chosen to dance in the Nutcracker Suite.  I bought several of these rubbings, with matching Thai silk fabric, to present as gifts for friends and families after I finished my service.  This rubbing has become a nostalgic reminder of my three years as a Peace Corps Volunteer in Thailand.