The last day of service in my community—Juan Montalvo, Province of Carchi—was one of the most heartfelt and well attended of my three years in Ecuador. I was the first volunteer to serve in this village of 80 families. The only stretch of road was about two blocks long, leading into town.

As I approached town that morning, I saw the entire population of grade school and high school students, family members and teachers lining the street. On the left side of the street, the students in their bright red and white uniforms waved hand-held American flags.  On the right, children were waving small versions of the Ecuadorean flag.

When I reached the end of the flag waving spectators, the children, the rest of the town, and I walked to the high school to reminisce and say our tear-filled goodbyes.  I thanked the town’s people (mostly indigenous subsistence farmers) for tolerating my less-than-stellar Spanish. I thanked my host family, who gratefully ate my American meals, although it didn’t make sense to them that a pot of soup needed more than one carrot. 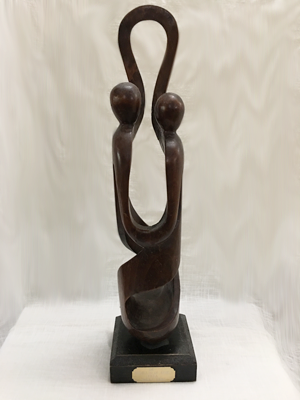 The grade school children and I had bonded at the health clinic, the “subcentro de salud.”  While there, they drew pictures of their homes (which I still treasure and keep in a safe place).

The high school principal, Hugo, championed my idea of giving a dozen high school students the opportunity to present a health fair in Juan Montalvo.  Later, we took the fair on the road to two other nearby towns. The idea of students presenting health fairs was completely new to them.

Our Associate Peace Corps Director, Dr. Miguel Artola, encouraged other volunteers to sponsor health fairs in their villages. After my service ended, I returned to Juan Montalvo two years later and met with those original twelve students.  Because of their experience leading health fairs, they told me, they had decided to finish high school, and had hopes of going on to higher education.

At the end of my farewell ceremony at the high school, I was honored with a gift of art— a wooden carved statue depicting a man and woman face to face, intertwined as one.  A small plaque on the front of the statue says (in Spanish), “From the 14 th of August School—for Nicola Dino.” I was deeply grateful to receive this one-of-a-kind artesania, made from local wood, bought by school teachers in my poor farming community.

This carving, a permanent decoration in my home, continues to remind me of the connections I have with my Ecuadorean friends. It is more than a souvenir. It is a reminder of the friendships I made, and the lasting connections that continue to reach across the years and miles.