In 1964, when it came time to return to the U.S. from Ethiopia, I felt that at least one souvenir should reflect the deep religious character of my students, teachers, and others I had come to know.  I had just finished my stint as a teacher at St. George School in Mendefera, Eritrea. While shopping in an Asmara open market, I found this traditional Orthodox painting of St. George slaying a dragon.  It has graced the walls of my various apartments and homes for more than fifty years. 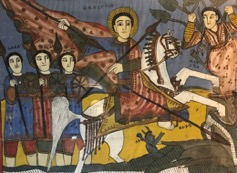 Such paintings can be found in churches of all sizes throughout Ethiopia and Eritrea.  (To see other examples of Coptic icons, visit this website.)  It is impossible to over-state the significance of Ethiopian Orthodox (also known as Tewhado or “Unity”) churches in this ancient empire.  The church’s roots go back to apostolic times, prompting a clever saying that I still hear from immigrants and former students who hail from Ethiopia.  When Christ returns to rule the Earth, they say, he may visit Washington and London and even Jerusalem, but he is sure to settle in Ethiopia. Why?  Because he will feel most comfortable there.  The country has hardly changed at all since he left.

Ethiopia has been changing, of course—at times, tragically.  Over the past 70 years, revolutions and dictators have tried to erase religion from Ethiopia—without success.  Both Muslim and Christian adherents have held steadfastly to their faiths.  Eritrea, which lies to the North along the Red Sea coastline, won its independence in 1992 after 30 years of conflict with Ethiopia.  In the year 2000, the new country again fought a bloody war over its border with Ethiopia.  Tensions between the two nations have only recently begun to ebb.

And yet, through famines, wars and internal strife, the image of St. George has convinced the faithful of each battered country that dragons can be slain, the innocent will be rescued, and Satan shall in the end be defeated.  St. George iconography no doubt predates Christianity, and can be found throughout Egyptian Coptic, Russian, Greek, Armenian, and Syrian Orthodox churches.  A full description of the St. George legends may be found at this website.

Personally, I attach no religious significance to St. George, but the painting somehow inspires courage and hope in me, nevertheless.