It was a great feeling knowing that I was helping this community of women learn new skills that, in turn, would help them support their families..

After raising six children and working multiple jobs, it was finally time to retire. I put my retirement funds in my bank account, and I headed down to Seattle and joined the Peace Corps. It had always been a dream of mine—and at the age of 62, I found myself in Nepal. The Nepali people took good care of me. And they loved that I already had white hair. Most Nepali women, when they get to a certain age, just sit in a chair waiting to die—and here I was, with my white hair, still active. I learned very little of the Nepali language but knew just enough to get by.

I signed up to help women make things to support their families. These are poor people. I taught them about sewing, something I’ve always enjoyed. My mother had sewed and I sewed practically my whole life. Being small, I always had to alter my clothes. I’m also one of the original members of the Anacortes quilting group here in Washington State.

Japan had sent a bunch of sewing machines to Nepal, so the women knew how to sew on a machine. I showed them how to hand stitch, embroider, and make their own patterns. I taught a beginning sewing class in the morning. There were approximately 15 ladies in the class—5 of them had just finished high school. We would have a half-day class four or five days a week. They started out sewing little bags. When they finished them, I put a spool of thread and three needles in each bag so that the ladies would have some sewing tools of their own.

In the afternoon, I taught a class that about 20 older ladies would attend. They already knew how to sew, but I showed them new techniques of decorative sewing that they could incorporate in their own items and also introduced them to some new ones. They started out making small items, like baby blankets, table coverings, place mats, doilies, and other things that they could sell. I’m pretty sure that the afternoon gathering was more of a social time, where the ladies could get away from their chores and kids to do some sewing and visiting. The women still had to do housework, gardening, take care of the kids, and cook the meals, so they came to class when they could. They also had to have their husband’s permission to take the class.

A lot of the work in this quilt was done by the girls in my beginners’ class. They made the quilt blocks later on, after a lot of practice in sewing and embroidery. I gave each girl a block of white fabric and asked them to embroider it. They embroidered beautiful designs on their blocks, and I used them to make the quilt border. The photos and hands in the quilt are those of the women in the class. I traced their handprints on paper and then I made the fabric hands. Some of the women embroidered the square in the center. After returning home, I pieced everything together and finished the quilt.

The women saw how I worked, and I tried to be more like them—doing things the way they did. They didn’t have the modern things that we have here, so I had to make do with what I could get. I’m glad I had the experience. It probably changed me in that I have more respect for the people who come here from other countries, although I’ve always liked anyone and everyone. It was a great feeling knowing that I was helping this community of women learn new skills that, in turn, would help them support their families.

And you know, I have enjoyed having the quilt as a wall hanging for many years. Now it’s time for others to enjoy it, too. 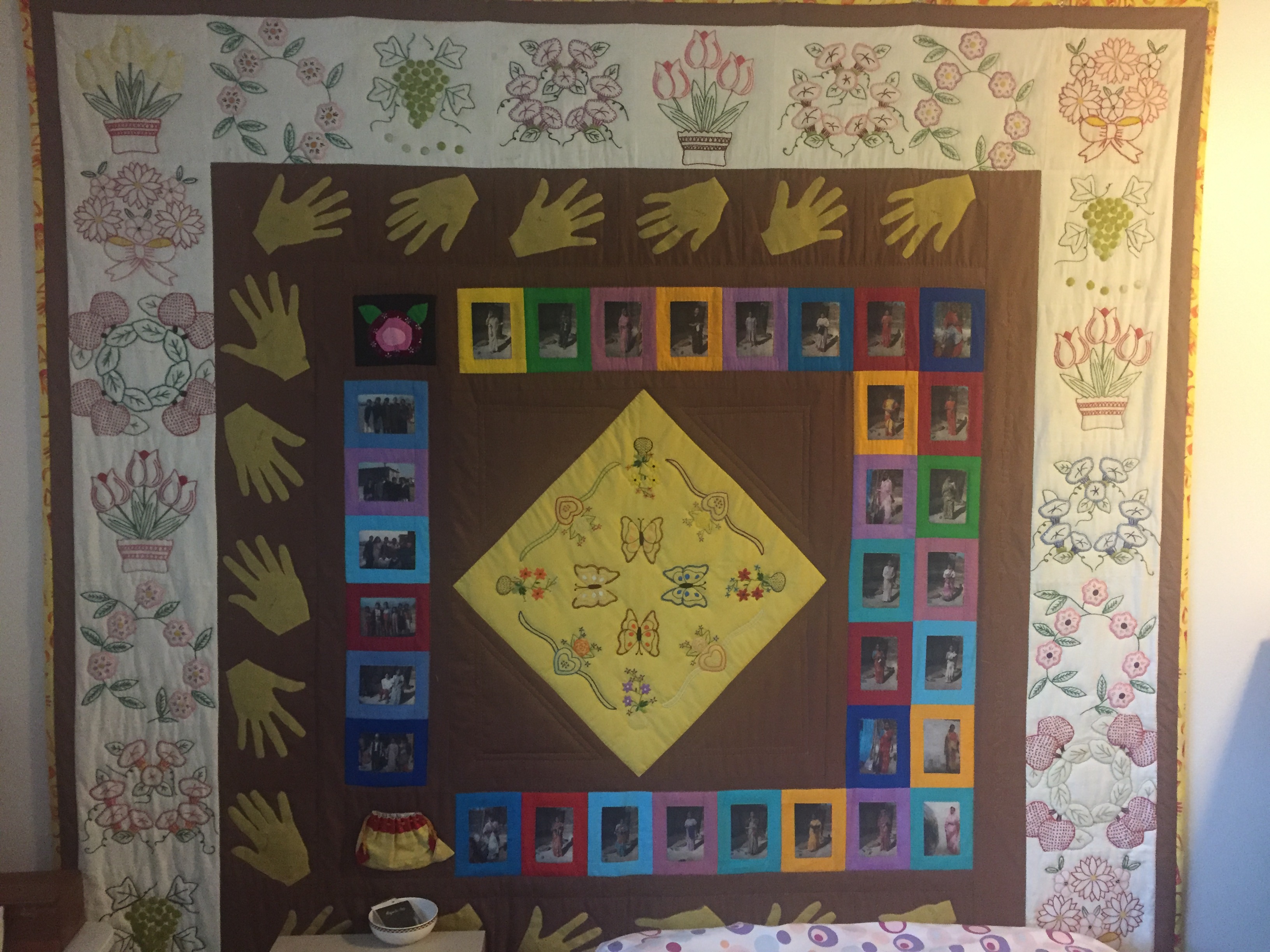 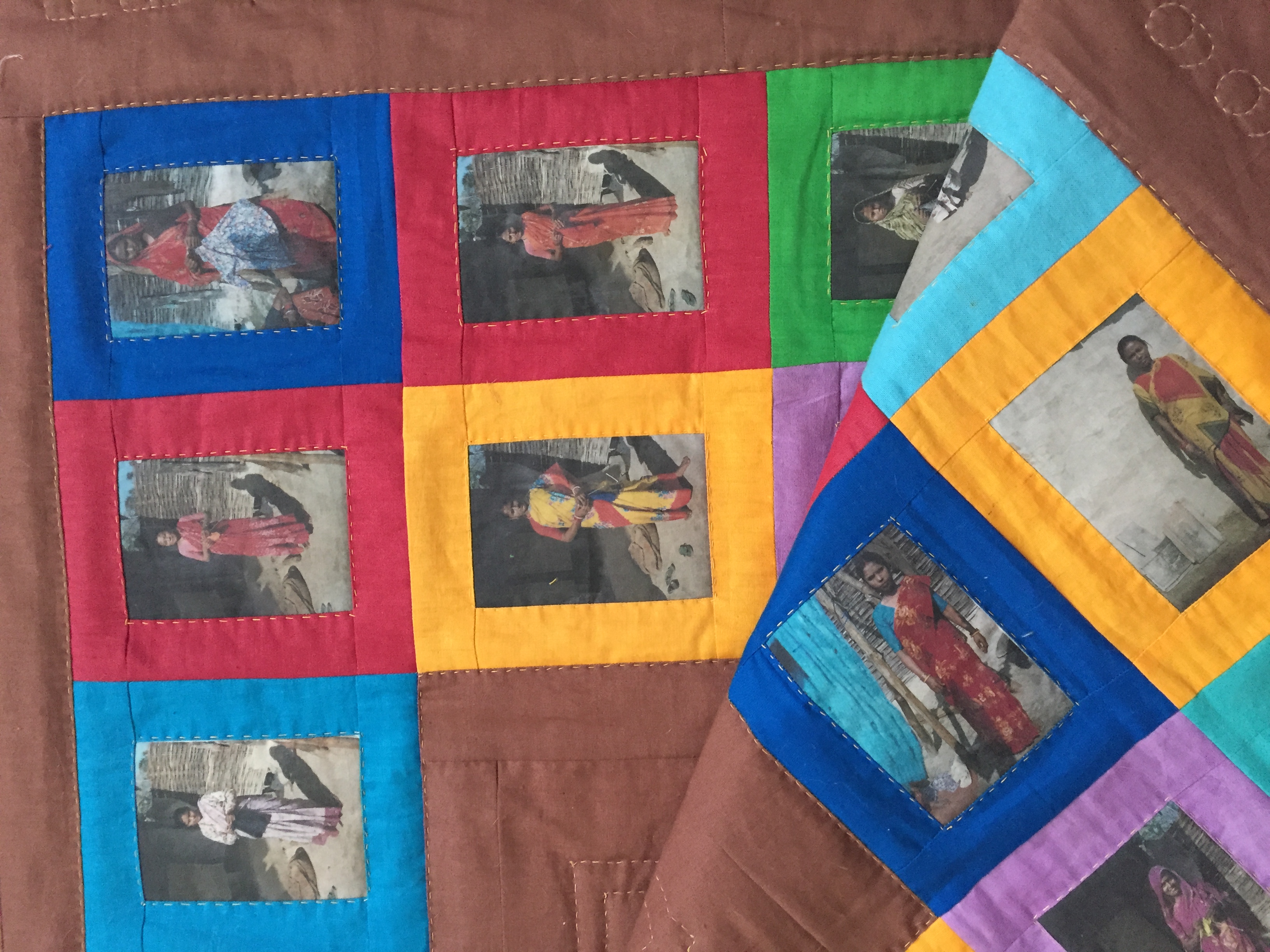 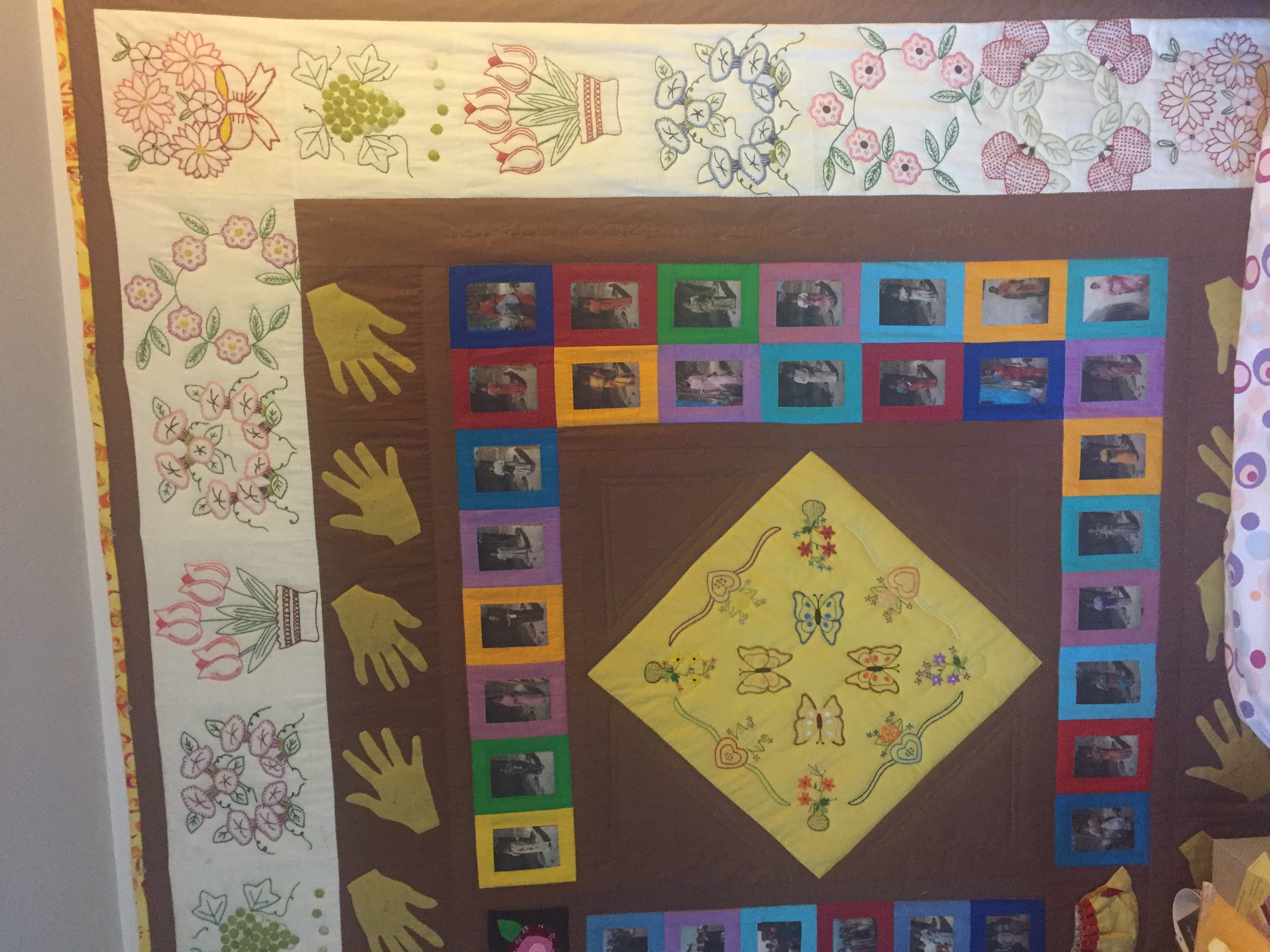